Nigerian Afrobeat star, Ayodeji Ibrahim Balogun, better known as Wizkid, has received his Grammy award plaque for ‘Best Music Video’ based on his his role in ‘Brown Skin Girl’ with Beyonce.

All Facts News earlier report that Wizkid won the Best Music Video for his song with Beyoncé; Brown Skin Girl, from Lion King: The Gift album.

The father of three won the award alongside Beyonce, who owns the song and featured artists, Saint John and Blue Ivy.

Wizkid got his first Grammy nomination in 2015 for a collaborative effort on American rapper, Drake’s album, Views, he, however, could not bring home the award.

Seun Kuti Reacts After Being Dragged By Wizkid FC Over…

This time, Wizkid’s collaboration with Beyonce and her daughter, Blue Ivy has now won him the biggest music award.

DID YOU SEE THIS:  Breaking: Popular Kannywood actress, Zainab Booth, is dead 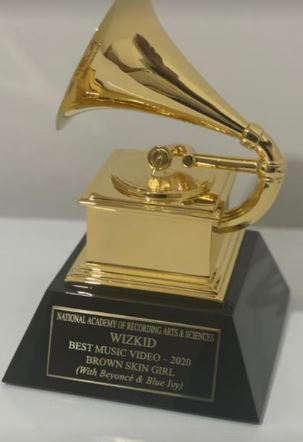